It was a surprisingly long and colourful road to the simple pictograms of man and woman that we know from most toilets today.

It may surprise you, but the pictograms with the straight body of a man and the skirt-expanding body of a woman were created less than fifty years ago. Until then, there were many symbols that separated women's toilets from men's - they differed both in creativity and where they were most often used.

Pictures or drawings of animals were often used for this purpose. Cock and hen, lion and lioness, or bull and cow were common twins. However, the division of toilets was also carried out with much more complicated and, especially for foreigners, incomprehensible symbols. 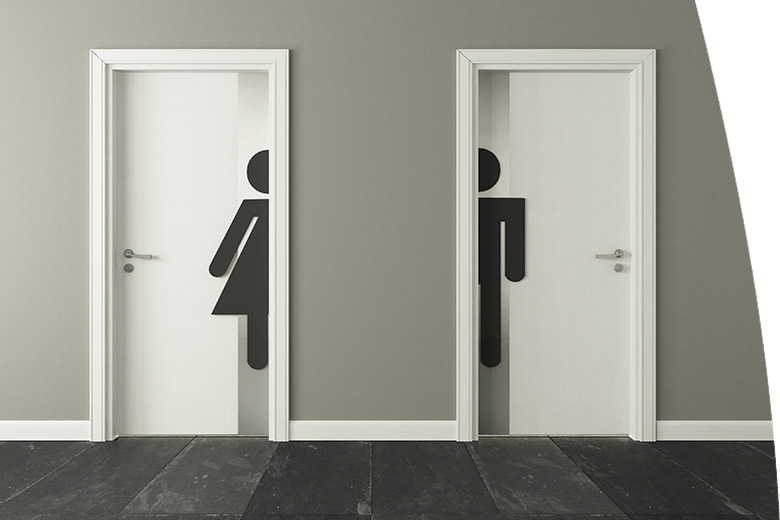 To Whom Does the Flame Belong?

For example, which door would you go to if one had a flame on it and the other had a water wave? Not so long ago, these symbols were used in Germany. (If you're asking: women had the symbol of fire, men had that of waves.) It was almost perfectly the opposite in Brazil. There, a flame marked the men's toilets - women had theirs marked with a flower.

In part, similarly vague markings nevertheless persist to this day - some toilets use the ancient Greek symbols for men (a circle with an arrow at the top) and women (a circle with a cross at the bottom) instead of the customary "figures". Simplified versions of the signage are also based on these, with a circle (or any image within a circle) for women's toilets and a triangle for men's toilets.

It may be worth paying attention to the symbols in your toilets, even if you may not be interested in their history or development. By clearly marking them, you are first and foremost sending a signal to your employees or customers that their comfort is your top priority. By marking them clearly and visibly, you save them time and increase their convenience.

In addition, they can be seen as another channel of your communication towards your visitors. It may not be worth embarking on grand experiments that would undermine the distinctiveness of the toilet signs. However, a small detail to spice up an otherwise stereotypical signage can entertain and add another dimension of memorability to your establishment, which may attract your customers back in the future.

When thinking about an aromatic toilet, the first thing that comes to our mind is probably a bold fragrance of an air freshener or a toilet cleaner.

How to Choose the Right Toilet Brush for Your Business?

How to choose the right type for your business and make life easier for you and your colleagues?